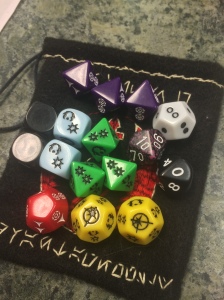 Last year, I got back into dice gaming. I’d played a very little as a teenager — it was pretty hard to be a geek in the late 90s without getting roped into at least one table session — but most of my RPG experience was text-based, during the heyday of LiveJournal (yes, I’m that old) or in AOL chatrooms (yes, I’m also that old). I’m not allowed to play MMOs, because I know myself, and my life would quickly become The Guild. But a friend and coworker pitched the new Star Wars: Edge of the Empire game to me, and it sounded so super-exciting that I decided to give it a whirl. I’m so very glad I did. We’ve been playing for over a year now, through several plot arcs and all sorts of ridiculous escapades. It’s my Monday night escape. I often complain that I have three careers and no social life, but this? This is a real hobby, and it can be just pure joy and relaxation for me, a time to play and to enjoy hanging out with some awesome people.

And yet, I still can’t leave my working brain behind entirely. The game is so narrative that of course I end up thinking about storytelling.

Last December, Jim Hines took over Chuck Wendig’s blog to talk about turning your D&D campaign into a terrible novel (and it’s a good giggle of a post). I have no doubt that there are people who really do this, though, and who then proceed to query agents and editors, all starry-eyed innocence, failing to understand that what made a good game does not necessarily make a good novel. I also think, though, that while straight-up transcribing your sessions is a seriously bad idea, there are still lessons that a writer can take away from RPGs.

Keep ’em on their toes: This relates to the “but then” rule I’ve talked about before. And honestly, it’s something I can have trouble with, pacing-wise. Never let the characters get too comfortable, and never let them go too long without an exciting incident of some kind. Give characters the chance to develop through action, not through pontification. Throw unexpected obstacles into the mix. If they make a solid plan to achieve their goals, change the given circumstances so that they can’t follow through as expected. In our game, I don’t think our plans ever stay the same for more than a few minutes at a time. The same should be true for characters in novels. 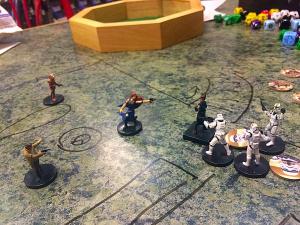 Let your characters surprise you: Our group is not the standard hack-and-slash coalition of fighters. We are… creative problem-solvers, is probably the best way to put it, and we’ll try just about anything before having to resort to violence. This occasionally leads to some truly bizarre sequences of events. As an example, early on in our campaign, one of the characters just straight-up decided to steal a plesiosaur-type creature and try to escape on it. This was not something our GM had anticipated. Another character once tried slowing down our opponents by setting off the foam-based fire suppression system on them (it worked). This was also not something our GM had anticipated. We once ended up at a dance party with abolitionist senators. The GM had definitely not anticipated having to tell us to “roll for dance moves”. The reason he’s a good GM is because he can let us do crazy things and then steer everything back on track — and that’s the job of a good writer, too.

Let them make bad choices. Bad choices are interesting. Bad choices lead to conflict, chaos, mayhem, struggles, strife. Recently, while in the middle of close-quarters combat, one of our party members decided to set off an explosive quarrel in the middle of the room. Not only did it spectacularly fail to do significant damage to our opponents, it damn near killed two of us. But it made things interesting — the party members still conscious suddenly had a much bigger problem on their hands, as they had to protect and extricate the wounded while still dealing with the attackers. The same thing goes for writing fiction — if a character charges in where she should, ignores the little voice in her head warning her away from danger, trusts someone he shouldn’t, then we get to see not only the conflict that creates but also how the characters deal with the subsequent fallout. Does she mistrust her judgment in the future? Does he have to make amends with someone? What does she learn? What ground does he have to make up? Bad choices can up the ante in exciting ways.

If grinding is boring for you, it’s boring for everyone: Your mileage may vary by genre on this one, as more military-focused books will spend more time in the blood, and so might different sorts of RPG groups. For me, though — and this comes from a background on the stage as much as anything else — a fight has to be a means to an end. It has to tell its own story and it has to advance something. A good GM balances the action sequences with plot development, because just churning through repetitive action after repetitive action can get real dull real fast. And the same goes with writing. You can only slam so many fight sequences together before the reader gets fatigue, and the reader also needs to care about the outcome of the fight. What’s resting on it? Who’s in danger and why do we want them to survive? What skill is the hero calling upon, and is she good enough with it to come out on top?

Have a diverse cast. I’m the only human character in our current group, which is pretty great. We’ve also got three female organics, one male organic, and one male-identifying droid. And our GM is great about making sure that the NPCs we encounter are evenly balanced — whether they’re Imperial officers, mechanics, senators, thugs, guards, food vendors, whatever — they’re a variety of species and genders. The universe is a wide and wonderful place, and storytellers owe it to themselves and their readers to showcase that.

Have a balanced cast. Our group features an abnormally agile big-game-hunting droid, an impulsive and mildly neurotic bodyguard, a debt-laden trader with a nearly palpable sense of self-preservation, a mechanic whose primary motivation is friendship, and an exiled politician who lives by wits and charm (yours truly). It’s a seriously weird group to have thrown together — but that’s awesome. Our skill sets complement each others’ really well. Not all books have to worry about ensemble casts, but for those that do, making sure the characters . Some of that can be done through archetypes — making sure you have enough different folk to serve different needs — but it’s about balancing personalities, too. Not every character can be the gruff and world-weary type, and not every character can be the effervescent optimist. It’s way more interesting to read about those types bouncing off of each other. The NPCs we encounter, engineered by the GM, reflect that as well. Some of our allies get along much better with some party members than others; some of our enemies are rubbed the wrong way more by some than others. We also encounter situations that play to our varying abilities — you can’t fight your way out of every situation, and you can’t talk or charm your way out of every situation, either. Keeping that balance keeps the story interesting for us players — and doing the same thing in a book will help appeal to a variety of readers. 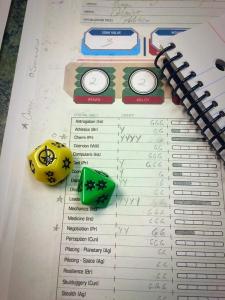 Make XP matter. We’ve been playing our game for a long time. We have an absurd number of experience points, and we’ve all used them a little differently — some have piled them into improving our dice pools for certain skills, some have acquired additional talent trees and special abilities, and some have kept a balance between those two choices. But the better we get, the more the GM has to keep in mind regarding the challenges we encounter. It can’t be too easy for us. He has to work harder to give us situations we can’t squirrel out of too quickly — because the point isn’t to “win” by besting the NPCs, it’s to invest ourselves in a good story! In fiction, the stakes have to get higher as the story goes on. A character should have the opportunity to grow, learn new things, get better — but then the villains and challenges have to get harder, to match. If the hero gets better at a skill, then there has to be a twist the next time he encounters a challenge calling upon it. You can’t face impossible odds at the beginning, and the final conflict can’t be a foregone conclusion.

Enjoy it. Like I said at the top, I commit time each week to the game because it’s fun, and I know our GM dedicates a lot more time to planning and scheming for us for the same reason. Building worlds, scripting situations, carving out the time, that’s all a lot of work, but we’re all in it because we like doing it. Writing’s hard work, and that’s the damn truth. But it should also be something you love, even when it’s tough. If you’re not having fun with the words, with the characters, with the situations, then what will there be for the reader to fall in love with?

So! How about y’all? Any other roleplayer-writers out there with thoughts on how the two types of narrative can speak to each other?