I love maps. I don’t know why, but cartography fascinates me. I find maps so beautiful. I particularly love historical maps — either maps that are, themselves, old, or just maps of earlier versions of our world. I’ve got a delightful book of maps of the Middle Ages, which shows changes to all of the inhabited continents from the 7th through 15th centuries. This year, I’ve even got a calendar of historical maps (June’s feature is a 1647 map of Iceland). The Game of Thrones opening credits utterly delight me. My favorite part of playing Civilization is typically exploring the map, figuring out where all the other civs are, locating the resources, and figuring out the best trade routes. In the fifth grade, when we were instructed to invent a state and make a map of it, I got marked down a few points for going utterly overboard and filling in damn near every available space on the poor little salt-dough construction with some item of interest.

I mention all of this because, when you’re writing a fantasy historical epic, having maps is rather crucial to keeping one’s head in place and places in one’s head.

I was bemoaning to my gentleman the difficulty in finding a decent map of late Republic Rome that I could mark up for my own purposes. Pretty well everything available is from much later on — Hadrian-era, sometimes, but often even later, 4th century. It makes sense — the archaeology is more reliable from that period, since things got knocked down and built on top of each other. But, though my story is an AU, it’s an AU based on the mid-first-century BCE, so using a map from so many centuries later would be an awful lot for me to have to un-see and work around, to recover what the city would’ve been like before all those baths and basilicas and palaces that the emperors built.

So, my gentleman asked me if there were any maps close to what I did like, and yes — my favorites have always been those in Colleen McCullough’s Masters of Rome series. Those books are meticulously researched, and even though the maps have some question marks on them (This was the… Temple of Feronia? Or Juno Curitis? Pompey’s house was… probably here?), when it comes to the overall shape of the city, they’re wonderfully detailed. The books also include a map of the *whole* city, not just the famous bit around the Forum.

They’re also, y’know, only the size of a trade paperback page, so while a good reference, it’s not something I can really scribble on to add in the things I need. I want to keep track of who’s on which hill, how far between them, who can oversee the river from their house and who’s got a view of the aqueduct. I added or moved some temples, but — damn, where did I put them? I’d made my own map of the entire Mediterranean with the provinces , but the minutiae of the city itself was just too overwhelming a project to consider starting from scratch.

So, hearing this lament, what did my beau do? Scanned those pages in and had them printed up as full-size posters! 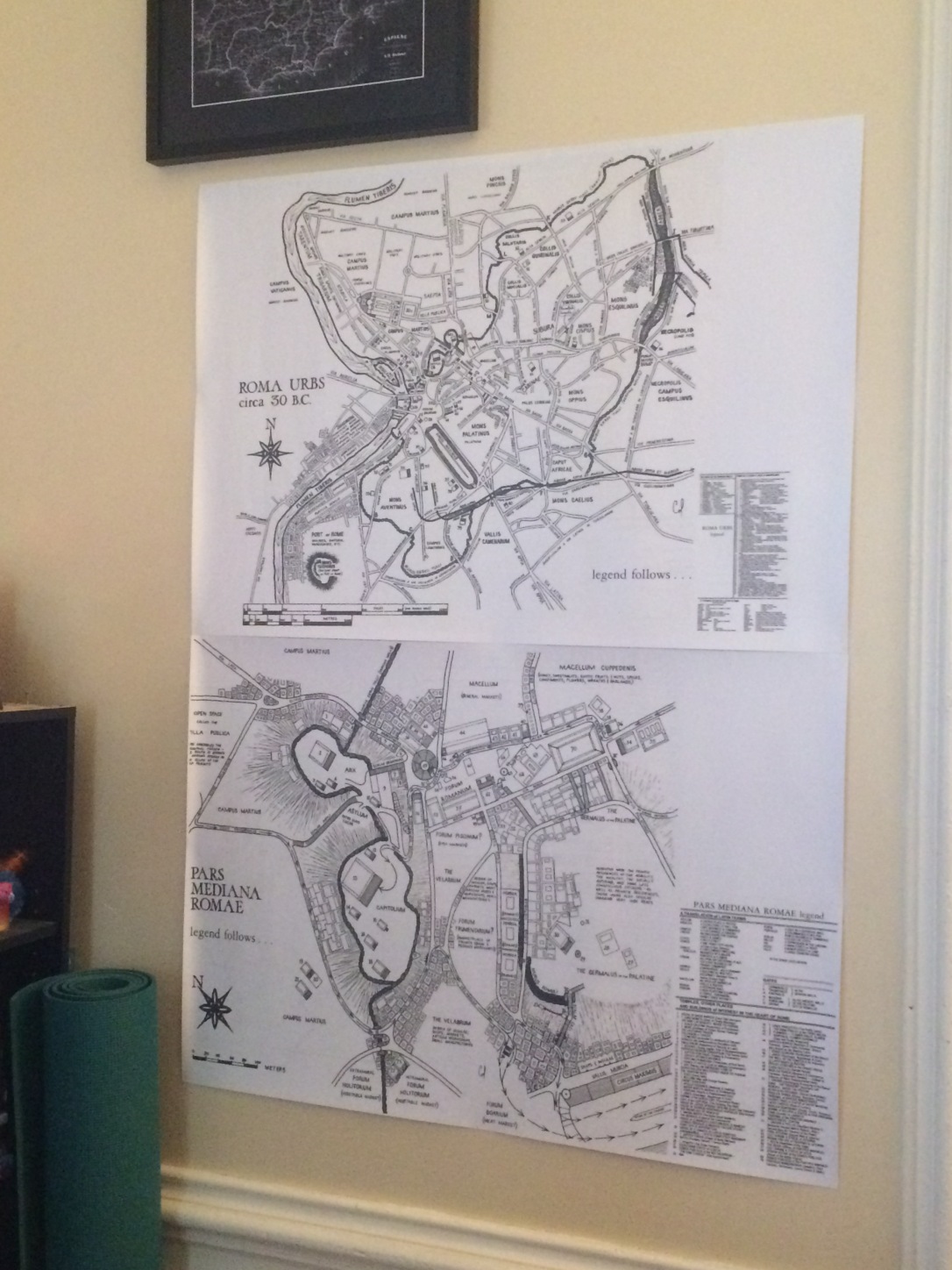 I’m so thoroughly delighted and grateful that he went to the time and effort! Now I’ve got a Wall of Rome to draw my Aven all over! (It’s underneath the map of Roman Spain given to me by my BFF last Christmas). Twelve square feet of fun.

I won’t start marking it up properly til I’ve finished this round of revisions, but I’ve begun by plotting out the epicenter of the story: 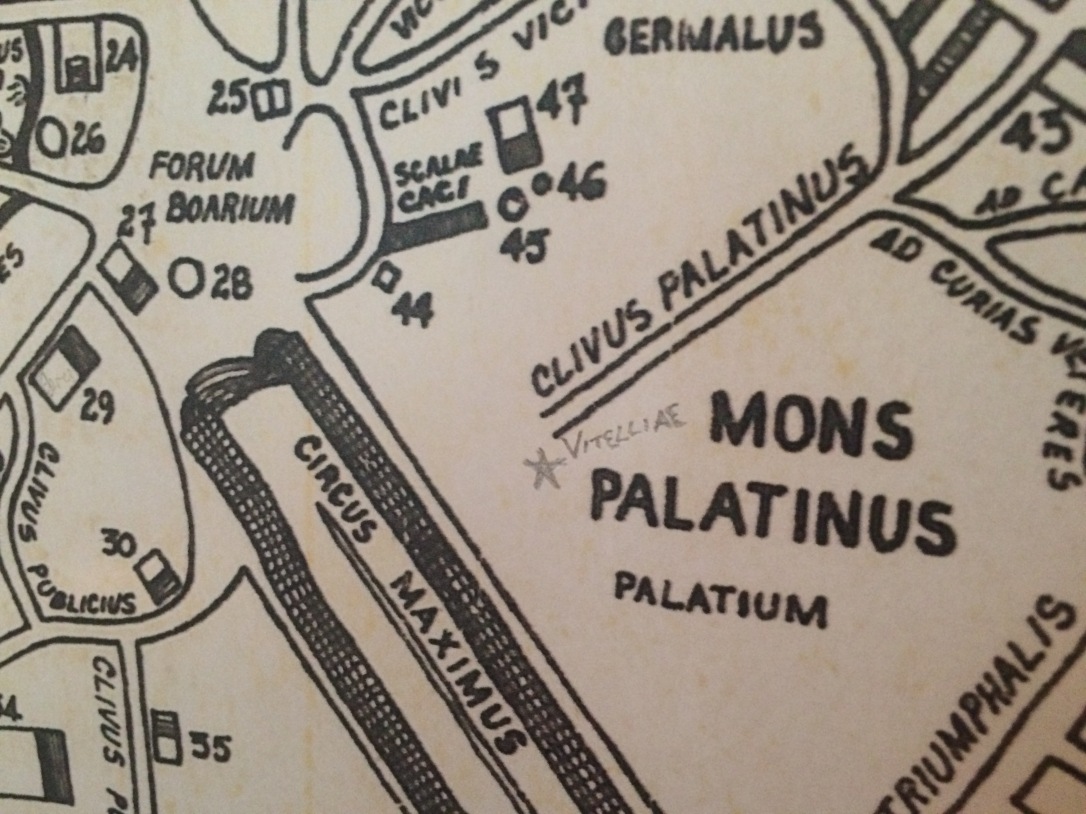 Okay, this is seriously the coolest thing I’ve seen on the Internet in a really long time. I’ve been using it for Aven, particularly when it comes to estimating how long it would take the army to move. Not only does it calculate times and routes, it can estimate prices, adjust for seasonal variants, give you the shortest versus the cheapest versus the fastest, and (this is so cool) the little thing at the bottom shows when you’ll hit which intermediate landmarks, how long you’re at sea versus on land, etc. 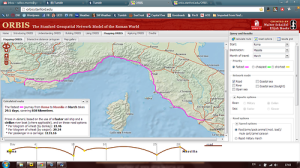 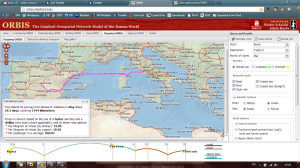 The only impediment to its usefulness for me is that it’s all clearly done height-of-Empire — which is no surprise, that’s when you have the most places to go and the best information about how long it took. But I will still have some fudging to do since a lot of these roads didn’t exist yet at the end of the Republican and the very start of the Principate.