So y’all know how much I love rhetoric. I’ve decided to come back to the World of Figures series, which I’d sort of abandoned in favor of the Hamilblog on Patreon, so that I can explore some rhetorical concepts in more depth.

All memes work because of repetition. That’s their very nature. Memes can also be seen as a type of metonymy, a type of metaphor in which a symbolic token stands in for a person, place, or idea. Think of a crown representing the power of monarchy, or the ways that emoji represent your mood or your response to something.

A simple example of metonymy in memeage would be the use of popular reaction gifs in many situations. It’s a repeated image that takes on cultural context of its own over time. If it achieves great enough saturation, you don’t even need to include the image itself to reap its benefits. Say there’s some drama going down on twitter. I could insert an image as a reply — or, I could type “[MichaelJacksonpopcorn.gif]” — and a meme-literate audience will know exactly what I mean. It works because of repetition — an image that has been seen enough times by enough people to be recognized even without the image itself — and it works because the image stands in for the idea “I am vicariously enjoying this while staying out of the mess”. That’s the metonymy.

Other popcorn gifs carry slightly different connotations — different exercises of metonymy. [DuleHillpopcorn.gif] is a little more active, implying a more engaged spectator, its connotation less petty but perhaps more visceral; [gazellepopcorn.gif] is by contrast a bit more passive, implying a spectator at a greater state of remove from the drama. [popcorn.gif] on its own might invoke any of these, inviting the reader to draw their own particular out of the abstract.

(Okay, if you aren’t familiar with those gifs, I bestow them upon you now.)

Many memes, however, flourish not through repetition alone, but through the transmutation of the original material. This phenomenon often occurs in what Know Your Meme calls “Object Labeling” memes, where words are imposed on an image to make a point.

I would argue that these memes become a form of antanaclasis. In verbal rhetoric, antanaclasis is the repetition of a word with a different meaning in the second usage. An example from 2 Henry IV‘s Falstaff: “O, give me the spare men and spare me the great ones.” In the first case, “spare” means “extra”; in the second, “save me from” or “let me do without”. Our brains appreciate that the shape and sound of the word is the same, but its underlying meaning has changed. Similarly, in the visual rhetoric of memes, there are instances where the shape of the meme is the same — the basic format, the image, and so forth — but the details create a different meaning grounded in the same context.

Some memes also function, in and of themselves, on a rhetorical basis. That is, they work on our brains in the same way that a particular rhetorical figure does. Take “Distracted Boyfriend“:

The meme usually works by imposing something you should be giving your time/attention onto Blue Shirt and the distraction/temptation onto Red Shirt, like so:

This meme works on the basis of hysteron proteron: the disorder of time, when what should be first comes last. In this meme, it works like this: For those of us in cultures which traditionally read left-to-right, we tend to first register the words imposed on Red Shirt first, then on Boyfriend, then on Blue Shirt. (Font choices and positioning can alter this somewhat; sometimes it’s easier to notice Boyfriend first, but if our brains are used to reading left-to-right, they’re still going to try to go to Red Shirt). This is something of a temporal inversion. Logically, the first thing of relevance is Blue Shirt. That is the status quo, the origin point, the reference. Neither Boyfriend nor Red Shirt have any relevance without it. And yet it’s the last thing we see! Our brains work in reverse — and that’s part of why it’s funny. It also enhances the visuals: in finding out Blue Shirt’s importance last, we also get to share/appreciate the expression on the model’s face.

Consider this reversal, which (I suspect unawares) calls out the nature of the rhetorical form — and isn’t as funny! 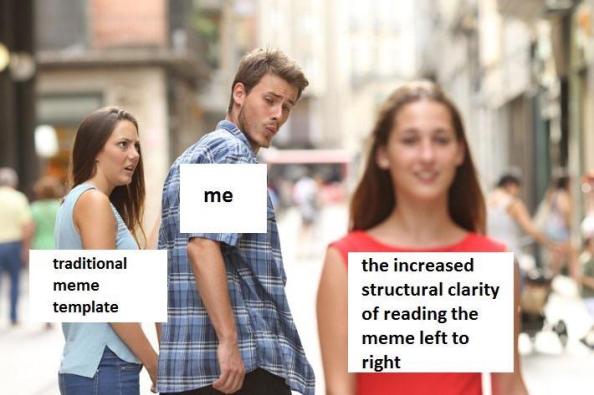 There’s no surprise there! It makes logical sense and progresses, but our brains don’t get to enjoy the inversion of expectations. The meme relies (at least in part) upon the Incongruity Theory of humor: something that rubs contrary to our expectations and established mental patterns is more likely to be funny. Cicero talks about this in On the Orator: “The most common kind of joke is that in which we expect one thing and another is said; here our own disappointed expectation makes us laugh.” (For more on that topic and humor in general, I’m going to shout out my W&M professor John Morreall, whose scholarship I still think about all the time in so many contexts).

Now, this meme also allows me to offer an example of another type of visual rhetoric: when the composition of the meme is re-created but with different figures. 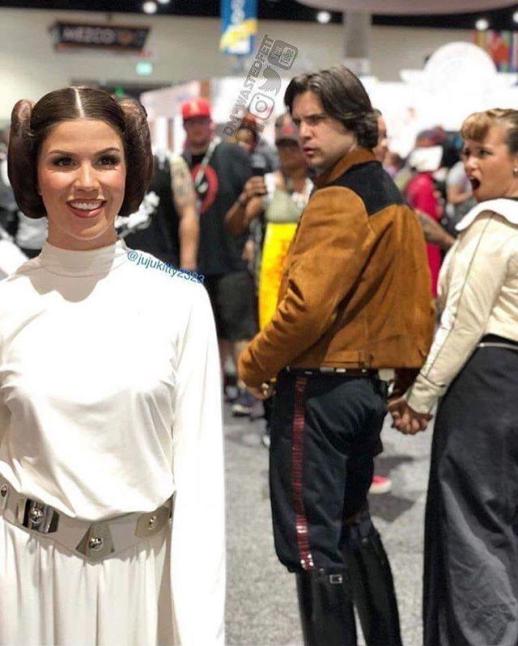 Appreciating this one takes a little Star Wars context: “Red Shirt” becomes Princess Leia, “Boyfriend” is Han Solo, and “Blue Shirt” is Qi’Ra, whom we learn in Solo was his first love. The cosplayers have taken the meme in a different direction, altering the image rather than imposing new text. It feels, to me, like a visual kind of isocolon, parallel structure. In written language, that’s the repetition of syntax. Take Brutus in 3.2 of Julius Caesar: “As Caesar loved me, I weep for him; as he was fortunate, I rejoice at it; as he was valiant, I honour him: but, as he was ambitious, I slew him.” But in memeage, the pattern is visual rather than verbal.

I feel like this topic, the visual rhetoric of memes, could be a whole interdisciplinary dissertation. I’ve found myself thinking about it more and more, and since memes don’t appear to be going anywhere, it’s likely well-worth the study on the similarities and differences of their effect on our brains as visual language.

Want more rhetorical goodness? Or want to be the first to see these posts before they hit the blog? Join my Patreon at the Patricians+ level to make sure you don’t miss out on anything!