So for the past couple of months, I’ve been revising Book Two of the Aven Cycle. It’s been an interesting process, because while I’m not actually generating a ton of new content, it’s felt like that kind of heavy lifting.

Have you ever seen that thing where an artist puts together jigsaw puzzles that have the same die cut pattern, but different pictures? That’s sort of what it feels like I’ve been doing.

I needed to rearrange some major incidents in the Aven/Latona plotline. Her story’s pacing was all out of joint. Big chunks of story needed to be moved up a lot, and others needed to be sacked entirely. Sometimes, though, bits and pieces of a scene were not just still usable, but still desirable — an important emotional beat, or some necessary observation on the wider plot. Then, the trick becomes recontextualizing the old scene for the new pacing and character arc. How can I lift this conversation, or at least its main beats, and redress the setting? Do I need to adjust the dialogue for a different mood or sense of urgency? Practically, am I now referring to things that haven’t happened yet?
There’s a lot to keep track of.

I also have to do that without things falling too out-of-sync with the Iberian plotline, where Vitellius, Sempronius, and Rabirus all are. I think I’ve kept things fairly well-yoked, but as I approach the Big Moment in the Iberina plot, I’ve still got a lot of the Aven/Latona component left to get to. (I’m beginning to have a lot of sympathy for George R R Martin, trying to weave plotlines happening concurrently in so many different locations. Not coincidentally, the new project I’m percolating for consideration as this year’s NaNo will all take place inside a single city). 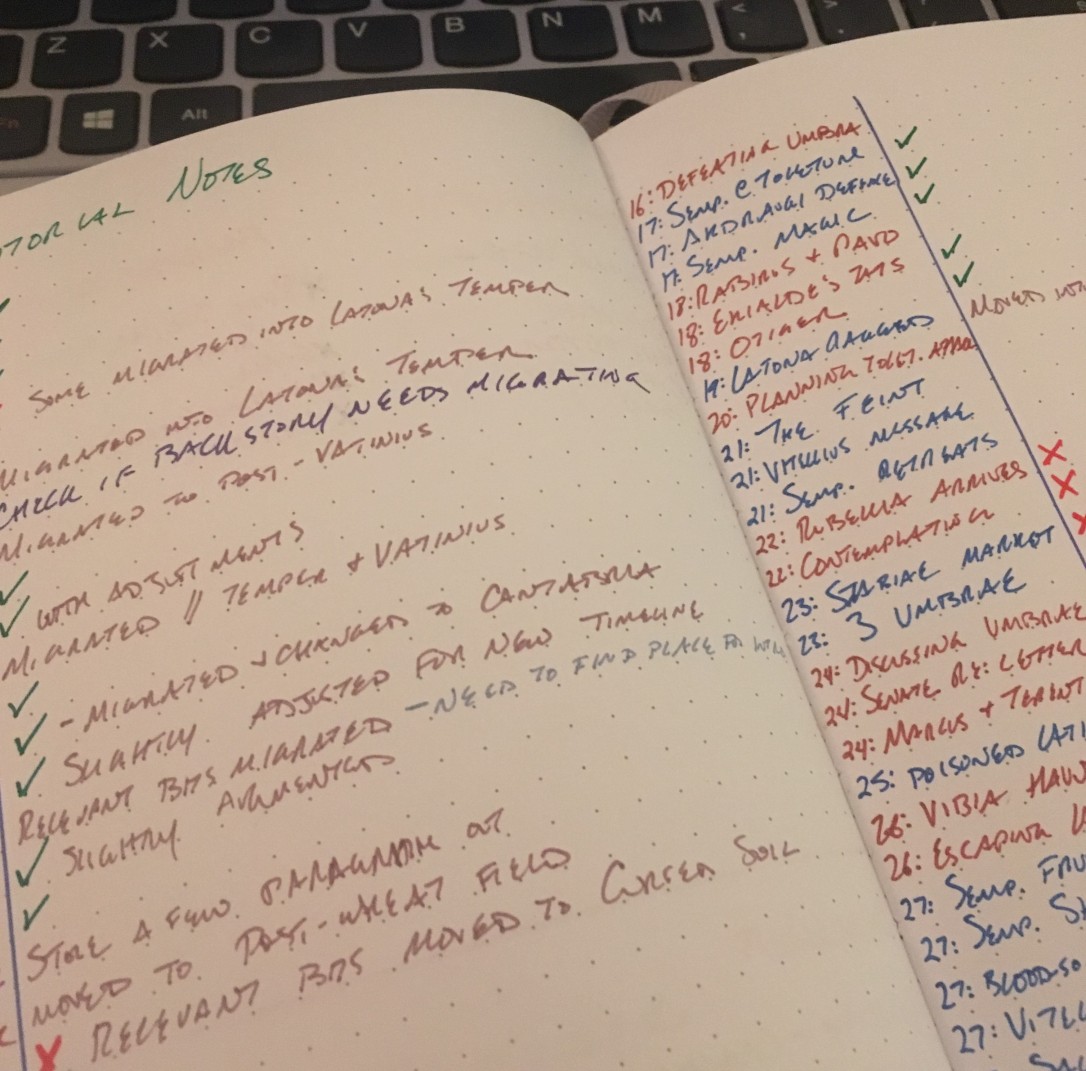 The picture above is from my bullet journal, where I’ve been trying to stay on top of all of this. I listed out every scene in the earlier draft, by chapter, with the titles I used in Scrivener. Then I’ve been marking down when I migrate them wholesale (as I can do with most of the Iberian chapters), when I’ve migrated them with alterations, when I’ve struck them entirely, and where — as with so many — I’ve migrated only part of a scene, and what it’s now part of in the new draft. I’ve also made notes on some where I know I want to include a portion of a scene in the new draft, but haven’t found a place for it yet. Some of those may end up being jettisoned if there’s just not a place for them, but this way, I can tell at a glance what puzzle pieces are still hanging out on the table.

I’m wishing now I’d left a line in between each entry, though, because some scenes have been chopped up into three or four pieces, and it’s been hard to write small enough to note where all the pieces have gone!