Once again, a Tumblr post has made me think thoughts.

This piece on geek girls/growing up female/becoming a female creator came across my feed recently, and the bit that struck me the most was this:

so we made it up. we gave barbie a cape and our spotted dog the ability to control the weather. we wrote barely-legible fanfiction about vampires who were also terribly in love with us – because we were perfect in this world, unlike the mess of what really was – we crafted entire sub-stories about how the main characters in our favorite universes were secretly girls in disguise. we made 17-year-old characters who would cut the throats of anyone who hurt them. we drew pictures of women in full, angry armor. we wrote bad poems about the girls we loved and the ones we were jealous of.

It got me thinking… Wouldn’t it be wonderful, if all the women writers shared their first efforts? The heroines they created in youth, ludicrous and wonderful. The princess-superheroes, the werewolf-ninjas, the warrior goddesses. The shameless self-inserts who saved the day. The Mary Sues.

Mine started out as an Alderaanian refugee/X-Wing pilot/spy/Jedi knight who was, of course, fantastically beautiful, as tall as I never turned out to be, prodigiously talented and independent at 16 (which, when you’re 11, seems perfectly reasonably grown-up), and the epicenter of a totally kickass strike team/soap-opera-worthy drama. Everything I wanted to be, I poured into her. Every story I loved, I ended up filtering through her. Over the years she was also an actress, a courtesan, a sharpshooter, a bartender, a mother, a great lady. She was whatever I needed her to be at the time. Others of my wish-fulfillment heroines were lion-women with gorgeous snarls and pitiless claws. They were warrior queens, adored by their armies, who flew into berserker rages when faced with injustice. They were femme fatales with starlit eyes and no mercy for men who did wrong. That first one stuck with me, though, and she’s been reworked into a dozen heroines since.

As the world turned more violent towards me and my friends, as I learned just how ugly it can be towards women, particularly women who don’t match up to certain expectations, my heroines got more violent, too. Looking back, the theme of vengeance trails through so many of my stories. Something was taken from them — a kingdom, a child, their liberty, their choice — and they would fight through anything to get it back. They would land themselves in trouble, captive and deprived of agency, and they would slaughter their way back to freedom. Bruised and bloodied they might have been, but they were always survivors, always the last one standing. And like I’ve said before, it wasn’t as though any thing so truly heinous happened to me — but I was reacting to the permeating misogyny of culture I couldn’t escape.

And I know so many other women who did the same thing. This was how we claimed space for ourselves, even if it was only in our own hearts. Even if we only shared those stories with each other, in safe small groups, on email chains or whispered over laced fingers in the dead of night, because it didn’t take us long to figure out what response we’d get if we shared them more widely. But they were our characters, our stories. We owned them and we took power from them.

I shamelessly advocate fanfiction not just as excellent training for those who want to be writers, but as a worthy pasttime for anyone in need of an outlet — most particularly for young women. On the page, you can scream and rail and punch and claw and kick and do all the things you can’t do in life. On the page, you can have power that the world denies you. If you do become a writer, you get better at it. Your characters cease to be perfect and all-powerful; they develop flaws and weaknesses. They fit into their worlds, rather than bending existing worlds around them. But what can still live in there is the sense of the fight.

So that’s why I’d love to know, from all the female authors I adore, who their first heroines of shameless self-fulfillment were.

Bonus material: I’m a paper packrat who’s kept every writing notebook and sketchbook she ever had. Proof of concept right here:

I never was much of an artist.

See? Was totally not kidding. 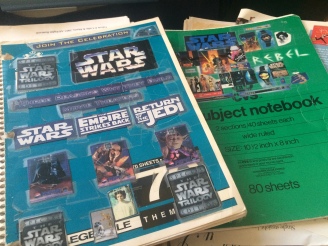 Pretty much all my notebooks from that era look like this.

My artistic skills got slightly better later on but only if I used something actually good as a model.