Aware that my focus had drifted a bit in March, I set myself a personal goal of 30k for the month of April.

And I was pretty sure this was a daft thing to do.

April is traditionally my busiest month of the year. In fact, now that I’ve got the TimeHop app, I can verify that I spend every April over-booked and under-slept. This year the usual fluster of activity was further complicated by the fact that I spent fully one-third of the month travelling internationally, first to Vancouver and then to London. Both are a bit of a haul from Virginia. When I was home, there wasn’t a day in the month I wasn’t at one job or the other, including most of my evenings being taken up by rehearsals. Making time in the rest of the hours to eat, exercise, and occasionally sleep… It didn’t leave a lot of time for writing.

But a thousand words a day really isn’t that much. A thousand words a day is manageable. A thousand words a day I really ought to be able to do, even in a busy month, if I want to be the kind of writer I think of myself as. And it was nice to remind myself that, yes, I can do that. I have the discipline. As you can see from the chart below, I mostly stayed on par. Those stalled days are when I was in London, and admittedly, I could’ve found time to write then — but it would’ve meant not walking through Hyde Park or visiting museums in the hours I wasn’t at the conference, and I just wasn’t willing to make those sacrifices. I don’t get to London often enough to pass up those opportunities. (I actually did write a bit on the plane both ways, but it was in a different file and didn’t get toted up till towards the end). 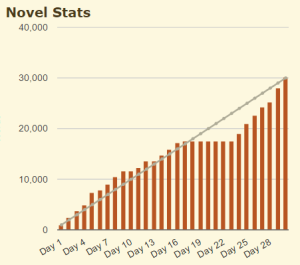 What surprised me was which project ended up getting the bulk of the attention. I’ve got two that I’m working on right now, and since Camp Nano’s rules are less strict than November Nano’s (and since I’m a bit of a Nano rebel in these regards anyway), I had pre-determined that I’d let myself work on both towards those 30k. That in of itself was a big help. While there’s a lot to be said for having a solid focus, as I did when I was editing Aven, there’s also a lot of value in flexibility. It meant I could come fresh to either project, and if I started feeling sluggish on one, I could pop over to the other.

I’d been charging ahead on secondworld fantasy The Seventh Star in February, but in April, I spent much more time on Goldheart, a space opera. The Seventh Star has a more solid structure, nice markers for its plotline’s progression, a very neat and ordered plan behind it. Goldheart is, well, sort of a hot mess. But that was where I wanted to play! The fact that it was so scattered and unstructured actually worked in my favor while Nanoing. I’d thought, going in, that having the strong skeleton I already had for The Seventh Star was going to help, but when I was working with such little time and had to seize impulsive moments to write, it ended up being easier to dive into Goldheart at random. I didn’t have to worry about where or how a scene fit — I could just write it, unencumbered by the constraints my own brain tends to impose when I’m working on something with a more distinct outline.

And lo and behold, on the very last day of April, I realized… I actually had a structure in there. I’m going to have to do a lot of trimming and rearranging, but I realized that I can actually hang the protagonist’s arc on something resembling a typical Hero’s Journey. It all clicked. And now I’ve got even more to go on as I move forward with the project.

Thoughtful structure is super-important when writing novels. But sometimes, in order to find it, you have to give yourself the freedom to play, first.