First off, if you are somehow on the internet and not yet aware of the #YesAllWomen phenomenon going on over on Twitter, then you need to check it out. If you’re a woman, you will probably feel some combination of depressed, heartened, proud, scared, and totally unsurprised by the stories being shared. If you’re a man, especially a man who wants to think of himself as a good guy, as a feminist ally, as someone trustworthy, then you need to go read, absorb, learn, and resist the temptation to put your two cents in. 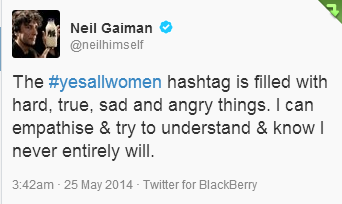 I have a lot of thoughts on this. A lot. It’s certainly no secret that I am an outspoken feminist, and this issue is one that cuts deep. It would at any time, but after the UCSB tragedy, after the girl who got stabbed to death when she wouldn’t go with a guy to prom, after the girl who got kicked out of her prom because her dress was considered impure by a bunch of gross fathers… it’s particularly timely.

I was ten years old the first time I feared for my safety because of sexual aggression from men. Boys, really — they probably weren’t much older than 16 or 17. But I was 10 years old, walking my dog, and they were following me in their car and shouting things I didn’t even understand yet. They circled back around again and again, until I, terrified, took a shortcut between several backyards to get home. I didn’t tell my father, because I was afraid he’d hunt them down with a gun.

It started when I was ten. It has not stopped.

So I have a lot of feelings. 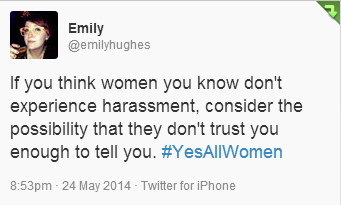 I’m also a writer. So I think about this issue as it pertains to storytelling.

And just as an exercise in that, it’s enormously powerful. The stories being told on that hashtag are emotionally moving — some are so sad, some are enraging, some are empowering, but they’re all getting my heart rate up. And as depressing as the stories are, as hard as they can be to read — particularly when the stream just keeps throttling, when the tales of misery and fear just. keep. coming. — it also makes me proud, and happy in a perverse, backwards sort of way. Because women so often feel silenced. Women don’t always get the space and the attention to tell their stories — and there are plenty of people out there trying to take this one away, to shame and silence what’s happening. (A note: If you’re a man arguing against this hashtag, you are part of the problem. If you’re a woman decrying it and claiming to be “not like those others”, you have some internalized misogyny that needs examining).

But I’m also a writer of fiction. So I’m thinking about that as well.

Media perpetuates these problems, but it can fight them, too — if done right. Some media tries and fails. Some — a lot — doesn’t try at all. And some stories — generally those told about women, by women, for women — succeed, at least in some measure. We can fight through stories. We can tell our own, we can tell each other’s, we can tell imagined stories that illustrate the reality. 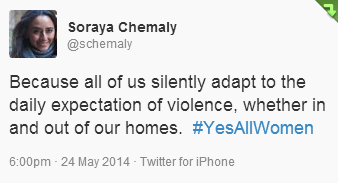 I write fantasy and science fiction. When I write fantasy, it’s generally historical fantasy — but that means AUs, which means I could change any rules I want. And in futuristic sci-fi, you get to make it all up anyway. So could I write a world without misogyny? Could I write a world where women felt safe in public? Where sexual violence was not the first threat an opponent would think to make? Where it wasn’t something women just expected to have to guard against?

I don’t think I could. Because I wouldn’t believe it.

I have to believe what I write in order for the story to work. Not in a literal way, but in the “things need not have happened to be true” sort of way.

And while I can believe in the possibility of elemental magic, of starships and moving through dark matter, of alien races and alternate words, of the dominos effect in history that could create a whole new reality… the misogyny of the world that I live in  is so ingrained that I don’t know that my imagination stretches far enough to undo it. I can hope for it, but not really believe in it, and that would out in the writing.

And I doubt my readers — at least, my female readers — would be able to believe in it, either.

There’s only so much disbelief you can suspend.

2 thoughts on “Yes, All Women: Cultural Misogyny from a Writer’s Perspective”